262 Cities · 137 Countries · 15592 Employees
News - Conqueror News & Newsletters
An Eastern European Success Story is by far the best way to describe Europrim Shipping, Conqueror’s exclusive agent in Constanta, Romania. Recently, we sat down with Augustin Muller, Europrim’s Manager, to find out more about their journey to success and how it plans to sustain it. 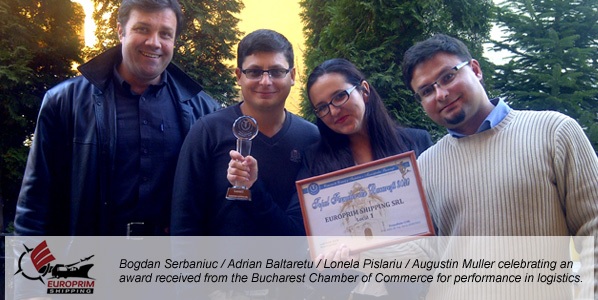 Q. Europrim was started in 2005, can you tell me a little about the logistics situation in Romania at that time?
A. When the company was started in 2005 as the shipping arm of the Europrim Group, the logistics market situation was so promising and optimistic; development plans were pouring in from all over the business world, direct foreign investments were literally marching into the country! It saw the start of a 7+ year period when business was booming in every sector of the economy.
Q. So, at a guess I would say things changed in 2008 when the global financial crisis hit. How did this effect freight forwarders in Romania?
A. The global crisis brought the economy to a stand still and people were in a state of shock; the good days were over. Factories were cutting costs, companies were lacking the hugely needed cash for development and people were being laid off. It was a gloomy outlook much like the rest of Europe at that time. Now, after almost 5 years, many small and medium sized logistics companies have closed down and many are still struggling to find their position in a more crowded than ever competitive market.
Q. But Europrim is still here, how has it kept going in such a gloomy financial climate?
A. It is said that “If nothing ever changed, there would be no butterflies”. At Europrim Shipping, we all know this saying to be true. But what kept Europrim Shipping alive and kicking hard, we, a small sized company, when even some of the big players were brought down to their knees? The answer is simple: the power to embrace change, to reinvent ourselves and to think outside-the-box.
Q. Can you give me some examples of these changes?
A. We have changed the way we do business by putting the emphasis on the new challenges of the market and trying to understand the ways in which the customers are looking for improvements in their logistics chain. We are constantly looking to optimize stock management and for ways to make the supply chain more flexible and more efficient. Because a new, flexible and innovative organisation was the answer to our customers needs, we fully rebranded the company.
·         Received the ISO 9001:2008 certificate
·         Joined several global organisations as IATA and FIATA
·         Hired industry specialists who are keen to start something new in an independent company

Q. Tell us about your LCL services and why the change from FCL was necessary?
A. Change from FCL to LCL was starting to be the standard in the business comMunity. In order to adapt to these times, we started an awarness and free consultancy campaign targeting customers who were still reluctant to change their FCL to LCL. We are now operating our 2500 sqm bonded warehouse right near the container yard in Constanta Agigea South Terminal and recently we became licensed for customs operations.  All our cargo is cleared in the shortest time possible, for further oncarriage to final destination. For more and more importers who are looking to manage a healthy company cash flow and consequently searching for more cost-effective ways of transporting their cargo, the LCL services from Shanghai and Hong Kong hub to Constanta port developed in 2010 by us have proven to be a good option. The results of the LCL service were beyond our expectations: from a mere 56 cbm co-loaded in 2009, our LCL cargo traffic grew on our consols to 567 cbm in 2010 and 2388 cbm in 2011, reaching the 5497 cbm record in 2012 helped by the opening of the new Ningbo and Shenzhen direct services. Probably for bigger ports and players these figures are not representing much, but for us, they are placing Europrim in the top 3 Romanian LCL operators in Constanta port.
Q. Can you tell us a little about what Europrim has up its sleeve for this year?
A. We have recently opened a new operational office in the port of Varna, in the friendly neighbouring country of Bulgaria and another one in Chisinau, Moldova’s capital. With these two new points pinned on the map, our sales force has become regional and we can now say that “thinking big” is far from being a simple cliche. But we don’t plan on stopping there. For us, this is just the beginning, we believe welcoming change is welcoming the future.
It is clear that Europrim Shipping is operated by a highly motivated and innovative team who, far from being complacent in these dreary economic times, are actually moving forward and growing their business successfully and at a rate previously unimaginable in Eastern Europe.
We welcome all members with shipments in Constanta to get in touch with the Europrim Shipping team.
Augustin Muller / Manager